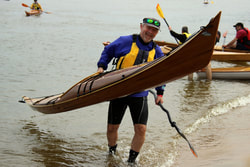 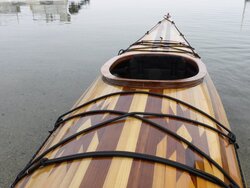 From Chesapeake Light Craft
​"Dan, a serial winner of "Best in Show" at our annual OkoumeFest builders' competition, is known for clean design and impeccable joinery."

"Dan’s sublime craftsmanship is evident in all of his award-winning kayaks; they have been an inspiration to my own nascent building efforts. Having paddled his most recent creation, a super-light Petrel, I am equally impressed with the awesome performance of his beautiful boats – perfection on water!" — Chris H.

"Many of you probably know that I bought a used Kevlar Kayak that I've enjoyed tons this season, but it had a few leaks that drove me crazy.
Dan Thaler of Moonlight Marine in Northern Westchester did a spectacular job finding all the leaks, doing his own diagnosis, along with very  professional repairs on the boat all at a reasonable fee. I highly recommend him." - Alan D.

"With our warmest thanks for finishing Dad's kayak. A dream come true, a family heirloom, a treasure, all thanks to you. We have been blessed to have your talents and time + most of all, the care you took with every detail" — Caroline R.

"(My canoe is) the best investment I've made in years"- John F.

Hi, Dan.
Just wanted to drop you a line and let you know that the Epic V10 Sport is better than new!
I went out in it a couple of weekends ago (wind has been crazy since, huh?!) and floated around just fine. The true test was taking it out of the water afterwards: Yes, it still weighed 27 pounds! - Jean K.

"In 2007 my dad began building a Shearwater hybrid from a Chesapeake Light Craft kit. This was his second boat, he built a strip-planked cosine wherry from plans and it is beautiful. He stitched and glued the hull and completed the design for the deck. The boat was assembled but only partially fiberglassed.

Then life happened: my mom & dad decided to downsize from the homestead and the barn was gone.  They bought a house with a shed that could be used as a shop.  The shop was not complete and the kayak sat outdoors for several years.  But he always meant to get back to finishing the kayak. For birthdays and Father's Day we bought him accessories: the life jacket and seat. He often spoke of the kayak and the next steps in the process.

In June of 2014 my dad passed away suddenly of a heart valve problem. After the initial shock wore off I began to think of the kayak, sitting forlorn in the yard.  I wanted to finish the boat myself but I am not a woodworker.  Still I went through his shop and found some pieces of fiberglass and ordered a new set of directions. I emailed John Harris of Chesapeake Light Craft and asked for advice. I busted out the random orbital sander and made some attempts at preparing the boat for varnish. Soon I realized I was in over my head.

I placed a notice on the Boat Builders Forum on the Chesapeake Light Craft website and Dan Thaler responded.   He came highly recommended by Mr. Harris and I heard that he had won awards at Okoumefest several years in a row. He was kind and sympathetic when he heard the story and said he would be able to finish the boat. A great weight lifted from my shoulders as I felt this heirloom could be preserved, even though I was not up to the task myself. My dad had left my sisters and I a little money and it would be enough for the kayak to be finished.

So with great hope and not a little fear we strapped the boat to the roof of the car and drove to New York. We met Dan and his wife and shared a lovely evening talking about boats and my dad. Dan looked over the boat and reassured me it could be fixed. My dad would have loved seeing Dan's shop and talking with a kindred spirit.

There were some problems along the way. Water had seeped inside the hull requiring Dan to cut a hole in the bulkhead to assess the damage.  The fiberglass needed to be removed and replaced. Throughout the process Dan kept us apprised of each development with emails and pictures. When the boat began to come together the pictures grew more and more beautiful. Dan kept a careful tally of supplies used and the hours he put in and we knew what we were spending at all times. His professionalism impressed me. I knew enough about the process from my dad talking about boat building and the Chesapeake Light Craft plans to be in awe of Dan's skills. He is an artist with wood, fiberglass and varnish as his tools.

The day came and Dan delivered the boat to Massachusetts. There was some time pressure at the end of the process as my sister would be visiting from North Carolina and Dan gracefully agreed to step up the timeline, sacrificing not a little sleep I am sure.  Dan showed me the rigging and hatch covers and how it all worked so I would be ready to paddle.

I can't describe the joy we feel at having the kayak returned to us in all its glory. I know my dad would be so proud and happy with how it turned out. It is truly a work of art so we hung it on the wall in our tiny condo.  But it is not permanently attached: it will be launched this Sunday after my dad's memorial mass. We don't know how to express our gratitude to dan for what he has done for us. We plan to pass the kayak down to the grandchildren and I am confident it will stand the test of time.

Before my dad died I would joke with him that he needed to hurry up and finish the kayak so he could build me a rowing shell. He had 3 daughters, 3 boats. I'm saving up to have Dan build the shell.